Isshinryu Basics and Kata - A Hypothesis

It just occurred to me from a recent article of a translation of a meeting that was held some time around 1936 it was said that there were two distinct teachings of kata, one a fundamental and the second a primary referred to with the term, Kaishu. A quote, “Established as the two types of kata to be taught in all karate circa meeting of 1936, i.e., fundamental kata to principle (gensoku-gata 原則型) karate kata.”

I think that, “Kihon kata (fundamental kata) [基本型] fundamental form; basic form; basic pattern; basic model; basic type; prototype.” Then I came up with the possibility that when Isshinryu was in the throws of its birthing over the years Tatsuo-san worked out the details that he took away the fundamental kata and replaced them with what he calls, “Upper and Lower Basics.” He then adopted those kata he deemed applicable, critical and most viable for his style into those that would have been taught as principled kata or as the article called it, “Kaishu kata.”

This change brought about kihon or basics leaving all the kata for the principle or primary system/style kata, the eight empty hand kata that comprised the kata of Isshinryu. This would help explain why so many other systems or styles teach the kata and the advanced kata, i.e., what was originally thought of as fundamental kata and kaishu kata (Primary or principle kata of the style).

Granted, this theory and/or hypothesis is a stretch and only substantiated by the article translated on the meeting of karate masters in the year 1936 that also alludes to what I term as educational institution karate by the changes referred to so that martial arts and especially karate could be properly implemented into the educational system of both Japan and Okinawa. It is also of note that such changes were meant to also include changing the more dangerous karate into a sport with uniforms and other accoutrements necessary for the country, the war effort and most of all the growth and commercial enterprising of karate of Okinawa.

Even if not true, correct or even relevant to modern karate it makes a nice story that could be how it came to be. Let me add one more point, the article expressed efforts to convert to sport therefore those who may have studied karate after 1936, in all probability, learned the edu-sport version of karate that means the karate taught to the Americans may have been all, or mostly, the edu-sport karate that lives on in modern times.

It also occurs to me that since Tatsuo-san was supposedly a student of some of those masters who practiced a dangerous version before the 1936 recommended conversions may have taught Tatsuo-san those dangerous aspects that gave him the inspiration to change his karate into the new version of Isshinryu. Mere theory not substantiated by any kind of accepted proofs but a good story just the same.

p.s. You know I am writing this because I like to see the Isshinryu purists go monkey dancing across a thread of discontent on the Internet of Things socially driven, Muahahahahahaha 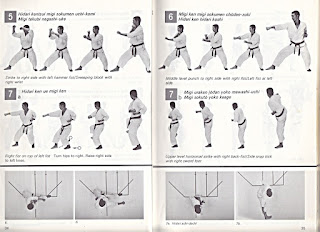