You failed to avoid the situation through no fault of your own, you were just at the wrong place, at the wrong time and against the wrong type of people. You were forced to defend yourself and now you have to deal with the aftermath.

First responders are taking your report and in the following example you state one or the other. Which do you think will go further in support of your self-defense defense. Yes, this is worded specifically as if a professional was making a report on a situation but you can still visualize how one or the other may have either a positive effect or an adverse effect on the report taken by the first responder, the police officer.

Which would you prefer and if you say the statement on the right then ask yourself, in your self-protection training and practice which is the one you practice? 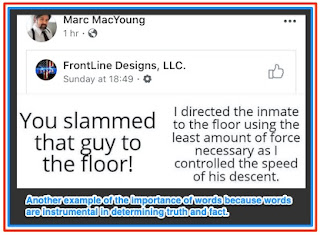 Example: The officer states, "you slammed the guy to the floor!" You might respond saying, "I directed the assailant to the floor using the least amount of force necessary as I controlled the speed of his descent." If you had said instead, "Damn right, I slammed that asshole down as hard as I could to end it here and now." Now, consider your demeanor, your tone of voice and these very words and then visualize in your mind how the officer, who is already in a certain state of mind, is going to receive, interpret and perceive this for his report. How is that going to be relayed to those in the legal system making the decisions as to prosecute or release with out prejudice?

For reference and sources and professionals go here: Bibliography (Click the link)
at 3:06 PM