First, a quote... "We humans have an uncanny ability to deceive ourselves and sometimes go through wild mental gymnastics to justify our opinions and actions." - (Wims Blog) Second, what is the shadows? It is that place in each human where resides the beast and we all have it regardless. We simply, through social conditioning and other acts both internal and external, build a wall that separates us from the shadows. On occasion through things like mob mentalities and mob emotional effects and transference that wall comes down and we do things that observed from the sidelines would make us sick to our stomachs.

Let me say again, we all live with the shadows just on the other side of the wall we build to feel safe, to avoid dangers and to avoid letting loose the dogs of war, the beast, that resides in all of us. I know it is there because as a military person, currently in an inactive duty status, I KNOW that all of us can do things we feel before that experience we would never ever do yet... we can and will do them. We just have to have the proper psychological tools to chip away at the wall to enter the shadows.

The dangers of modern society is that we forget that the wall is there and that the shadow world that is violent sometimes in the extreme is just sitting there a mere wall thickness away and that thickness varies to each of us and that wall is not impenetrable. Remember that, "The WALL is NOT IMPENETRABLE!"

The shadows are where the dangers lurk, the beast sits patiently and awaits the moment where either we, ourselves, or others chip through that wall and let loose the beast within us all. There are those who find themselves subject to the whims of the beast and end up saying, "Someone else made me do it; I am not a bad person; and It isn't my fault!" All the while others whose wall is still intact, their beast sitting in the shadows and with their stories telling them it wouldn't happen to them sitting in that chair, judging you and your beast regardless of the wonderful peaceful and non-violent life you led all the way up to that point the wall dropped.

Think about it, think about the wall, find out the walls construction and remember just on the other side resides the beast sitting in the shadows waiting patiently to be let loose, it is there within you just don't refuse to believe that you, like all humans, have that ability within you. Take control, do the things that make the well less breach-able and avoid letting loose the dogs of war sitting just a smidgeon away on the other side of the wall to the shadows of man.

“An important part of self-defense is prioritizing and accepting risks that are inevitable. Living on this planet is risky by default. You do what you can to avoid everything nature has to offer that can wipe you out, but you know there is always a possibility for disaster to strike. Self-defense should be the same: do your best to avoid danger, but keep on living your life to the fullest despite knowing it is impossible to avoid everything.” Wim Demeere “You are surrounded by killers… “ 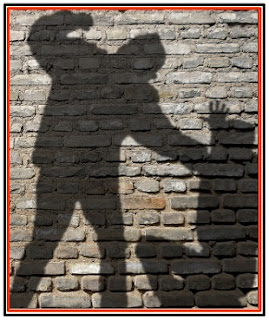 For reference and sources and professionals go here: Bibliography (Click the link)
at 8:55 AM