You Can Lead a Horse to Water … But …

How many times have I heard this meme in my life? I can remember hearing it even in my pre-teen days, coming from my mother and father when they wanted to get the point across as to how stubborn I was and how that resulted in my refusals to change even the simplest and easiest of things. I still suffer, to a degree, today on that aspect of my personality. Where differences arise like cream on top of milk is that I realize my stubbornness and am now willing to make changes - depending …

I can remember how changes were there in front of me concerning my disciplines in the martial arts and karate but that stubborn refusal trait kept me in the darkness of my beliefs until just one person was able to get me to make a change in my ability to see and in a more surreptitious way, where I wanted to see and change over being ‘forced’ to change by others.

What in the HELL are you talking about, well the old adage of leading a horse to water but not able to make them drink meme popped into my head so I thought, wellll … and here I go on another tirade in the hopes that something will do the inevitable, change.

Now, I don’t know who fist coined the phrase but it is explained as follows, “You can present someone with an opportunity, but you cannot force him or her to take advantage of it.” In martial arts and karate communities due to certain influence principles most tend to lean heavily toward certain beliefs including those about its history, culture and heritages. Even when these are presented factual information toward a difference or even a drastic change they refuse to change. It is a very human condition of our species and like the horse, the only way to get them to drink the water is to present it in such a way as to make the drinker think and believe the changes are coming from them, their inspirations and their beliefs.  They call this process compliance and it involves presenting things in just such a way as it kind of manipulates the recipient into a compliance mode of an unconscious nature using influence principles to - literally influence them into making a change as if they discovered it and decided through their free will to make the change. There is a whole industry that uses influence principles and it is called, Compliance Professionalism.

It literally influences or persuades the recipient to literally lead themselves to the water and it gives them such a thirst they drink deeply of the clear, clean, cool waters even when just previously they refused to accept the knowledge and called it blasphemous to the ninth degree.

YOU CAN LEAD A HORSE TO WATER, BUT YOU CAN'T MAKE IT DRINK

”One of the oldest aphorisms in English, this adage was first recorded in the Old English Homilies: ‘Hwa is thet mei thet hors wettrien the him self nule drinken.’ A modern version appeared in the 1602 play Narcissus: ‘They can but bringe horse to the water brinke / But horse may choose whether that horse will drinke.’” 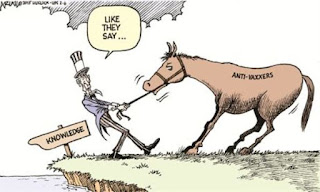